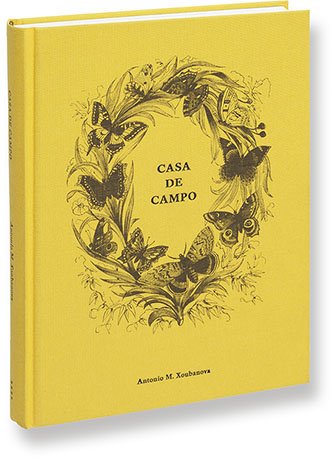 Casa De Campo
by Antonio M. Xoubanova
Publisher's Description
“Someone was here, somebody did this. Stuff happens here.”

Casa de Campo is a photographic fable rooted firmly in the realities of Madrid’s largest public park. Casa de Campo sprawls, five times the size of Central Park, to the west of Madrid. Between 2008 and 2012 Antonio M. Xoubanova wandered the paths of this urban woodland examining the people, animals and objects he saw as if he was on uncommon ground. Inadvertently he found himself transforming a given reality into narrative fiction.

Designed as an ancient fairy tale, the book is made up of five chapters referring respectively to love, death, fleeting moments, symbols and a lack of direction. It examines both the symbolic and the oneiric through the gathering together of people, animals, animate and inanimate beings within this single space. In his text Luis Lopez posits that for any researcher, archaeologist, intruder or anthropologist their findings will always be the same: someone was here, somebody did this. Stuff happens here.

These traces are what drew Xoubanova back into Casa de Campo over the years.