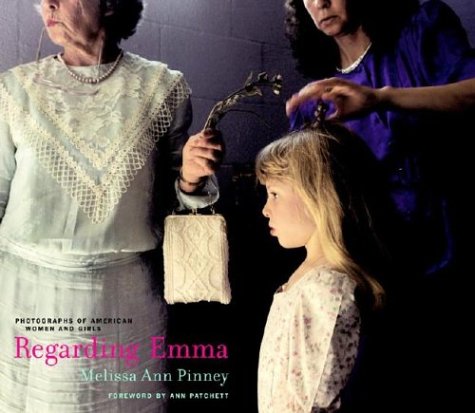 Regarding Emma: Photographs of American Women and Girls
by Melissa Ann Pinney
Publisher's Description
For more than fifteen years, Melissa Ann Pinney has been making photographs of girls and women, from infancy to old age, to portray how feminine identity is constructed, taught, and communicated. Her work depicts not only the rites of American womanhood--a prom, a wedding, a baby shower, a tea party--but the informal passages of girlhood: combing a doll's hair, doing laundry with a mother, smoking a cigarette at a state fair. With each view, we gain a greater understanding of the connections between mother and daughter, and by extension the larger world of family, friends, and society. Pinney's approach to interpreting girlhood became more complicated and complex when her daughter, Emma, was born eight years ago. Emma's childhood evoked in Pinney her own girlhood and gave her work new meaning and purpose. Ultimately, Regarding Emma shares with all of us the incremental and the ritualistic changes that take place in a woman's life over time. Her photographs are artistic and social documents that reveal the subtle and bold aspects of feminine identity--documents whose reach will extend well beyond the walls of America's leading galleries and museums into the hearts and homes of everyday Americans. 'Melissa Ann Pinney is making powerful art. In matters of light, color, and composition she is flawless. But these are not simply constructions of elements. These photographs bear witness to the speed at which the little girl becomes the old woman, to the fleeting, breathless beauty of childhood, to life itself, which leaves us stunned in its wake.'--Ann Patchett, from the Foreword 'Melissa Ann Pinney provides a compelling portrait of American girls as they make their way from infancy to adulthood. Using her daughter's childhood as a point of departure, she traces the complex terrain of adolescence and budding femininity. The results are photographs marked by empathy and grace.'--Sylvia Wolf, Sondra Gilman Curator of Photography, Whitney Museum of American Art, New York City 'These photographs by Melissa Ann Pinney impart a sense of the special and sacred everyday rituals we take for granted. She appreciates at once the transient nature of what she finds and its gravity. Her pictures describe so well the wonder, and beauty, and centrality of the things we know best and the people we see often.'--Sandra S. Phillips, Curator of Photography, San Francisco Museum of Modern Art 'Melissa Ann Pinney's record of life with her daughter, Emma, adds a new and touching chapter to our knowledge of the lives of women and girls.'--Adam Gopnik, author of Paris to the Moon and a staff writer for The New Yorker 'Melissa Pinney's passionate, painstaking investigation of the stages of women's lives is impressive for its rigor and courage. Her themes aren't imposed on the pictures or on the women, men, and children who people them; instead, they arise from her attentive study of particularities-- of the ways human lives are etched on the surfaces of faces and the positions of bodies in real spaces and places, mundane but radiant. When she turns from the lives of others to her own life, the shift is seamless but the volume swells, the emotions grow more pointed and the paradoxes more painful, joyous, and direct. This is remarkable work by an artist at the height of her powers.'--Peter Bacon Hales, author of William Henry Jackson and the Transformation of the American Landscape
ISBN: 1930066147
Publisher: Center for American Places
Hardcover : 120 pages
Language: English
Dimensions: 0 x 0 x 0 inches