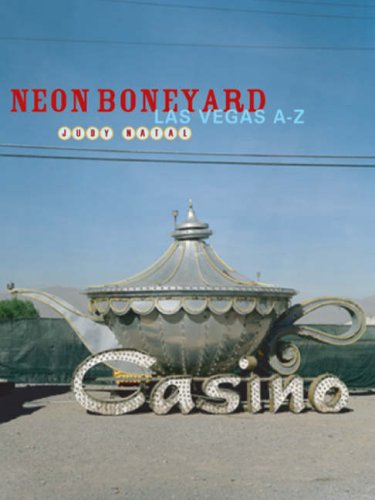 Neon Boneyard: Las Vegas A-Z
by Johanna Drucker
Publisher's Description
The garish glow of neon was part of what put Las Vegas on the map - quite literally. The city’s most distinctive form of expression, neon signs tell an elaborate story of the history of Las Vegas, from their debut in 1929 at the onset of the Depression, when their seductive tones lured travelers through the Mojave Desert to part with scarce dollars, to today, when their flickering glow is a vanishing facet of the gaudy spectacle that is contemporary Vegas.

Established in 1996 to preserve Las Vegas’s underappreciated neon heritage, the Neon Boneyard houses many of the city's historic casino signs on a three-acre site at the edge of the city. The core of the collection of unrestored signage came from the pioneering Young Electric Sign Company, one of the first to produce neon signs in the area; but, in recent years, it has grown through donations from businesses and individuals who appreciate the key role played by neon in the growth of Las Vegas.

Through Judy Natal’s photographs, the Neon Boneyard becomes a dynamic archaeological site that brings Vegas’s past to life in startling ways. The towering figure of Mr. O’Lucky becomes a home for the homeless, while the crumpled sign of a wedding chapel reflects the faded dreams of a lost paradise. Through such juxtapositions of success and failure, of past and present, Neon Boneyard: Las Vegas A–Z returns us to an earlier image of Vegas, suffused with the warm, commercial glow of neon, lighting the desert and inventing modern nightlife.
ISBN: 1930066562
Publisher: Center for American Places
Hardcover : 88 pages
Language: English
Dimensions: 0 x 0 x 0 inches