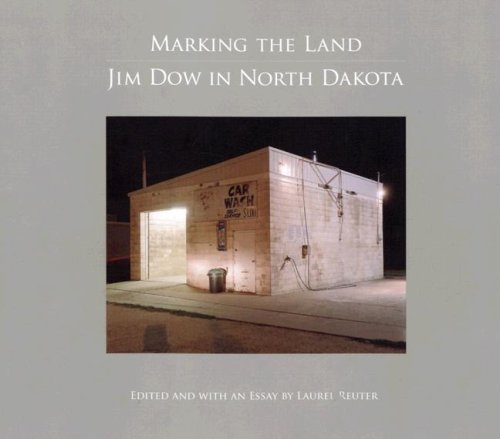 Marking the Land: Jim Dow in North Dakota (Center for American Places - Center Books on American Places)
by Jim Dow
Publisher's Description
In 1981 the North Dakota Museum of Art invited Jim Dow of Boston to photograph the State’s environmental folk art—that is, architecture, signage, sculpture, painting, grave markings, working shops, the stuff made by farmers during idle winter months, and all else that decorates the land. Over the course of a year, Dow captured over a hundred images. The initial commission was funded by Target Stores. Then in the late 1990s, he returned to North Dakota to photograph Northern League baseball parks. Dow once again was hooked on North Dakota. The Museum found enough money for Dow to begin anew, but this time with one condition: he could photograph whatever he pleased but Northwest Minnesota should be drawn into the project. From a distance of twenty years, Dow saw the larger themes harbored within the photos: change, the passing of time, the innate creativity demanded of people who live in rural or remote places, and the way humans live lightly on the land and then move on, leaving marks that soon fade away.

Jim Dow’s photographs are among the most important works ever created about North Dakota. They encapsulate the historic change that swept across the Northern Plains in the last half of the twentieth century. Dow literally has captured the traces of people who have died or gone elsewhere. He records an earlier, hand-made existence, churches now sitting empty, the remains of decayed civic life. Described as having the 'grandeur and loneliness of ancient ruins,' Dow’s work has been cherished for documenting the disappearing uniqueness of American life.

The book opens with Views of North Dakota, twelve gigantic murals painted on the walls of the State Prison yard half-a-century ago by Charles Oliver. Dow photographed them in their crumbling state just before they were torn down. He closes with Whitey’s Wonder Bar in East Grand Forks—before and after the 1997 flood. With his 8 x 10 large-format camera, he recorded groups of “dinosaurs” or thrashing machines arranged on the hills near Amidon. The World’s Largest Holstein Cow near New Salem. Henry Luehr’s Bull from Buchanan. The hand-forged iron crosses made by Germans from Russia marking the graves near Hague and Zeeland. Sign for Barlow Meats in Devils Lake. Alex Pauluck’s Shop in Belfield. Sig Jagelski’s Jugtown near Auburn. Artist Walter Piehl’s painting studio, his drawing classroom at Minot State, and his Blue Rider Bar. The Goose River Lutheran Church before it burned as well as the State’s grand churches in Warsaw. Dazey, and Strasburg, Eccentric architecture such as the Kite Café in Michigan. Monuments and follies intermingle with one-offs and life-time passions in Jim Dow’s masterpiece, Marking the Land.
ISBN: 1930066643
Publisher: Center for American Places
Paperback : 224 pages
Language: English
Dimensions: 11.5 x 10 x 0.7 inches