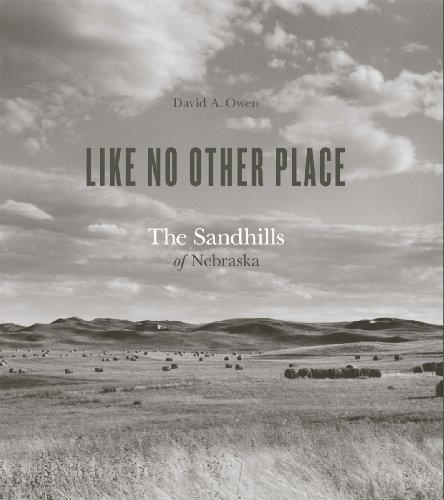 Like No Other Place: The Sandhills of Nebraska (Center for American Places - Center Books on American Places)
by David A. Owen
Publisher's Description
Covering nearly 20,000 square miles, the Nebraska Sandhills are the largest sand dune formation in America. Consisting primarily of grass and wetland, the Sandhills are inhospitable to agriculture and had been thought to be nothing more than forbidding desert until cattle ranchers turned the Sandhills into one of the most productive ranching regions in the country in the late nineteenth century.

Like the ranchers before him, David Owen found his place in the Sandhills of Nebraska. A widely travelled Episcopal minister and photographer, Owen and his wife moved from their home in Connecticut to become Nebraskans, and Like No Other Place documents his experience of this uniquely American place and its people.

Throughout Like No Other Place, Owen is both photographer and storyteller as he connects the everyday activities of the ranchers and residents he encounters to the vast, isolated landscape. Owen provides a fascinating, firsthand look at a simple, though hardly simplistic, existence. Featuring poetry, song, recipes, and traditions within Owen’s narrative, Like No Other Place celebrates a remote and unfamiliar corner of the United States.
ISBN: 1930066929
Publisher: Center for American Places
Hardcover : 148 pages
Language: English
Dimensions: 8.5 x 9.8 x 1 inches