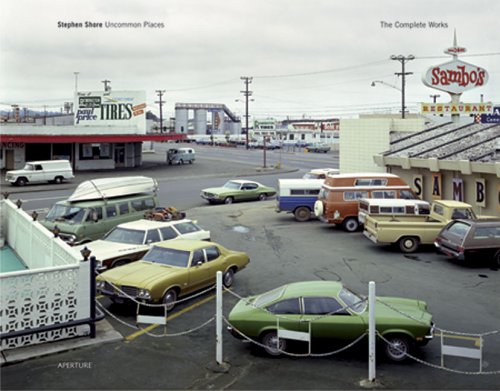 Stephen Shore: Uncommon Places
by Stephen Shore
Publisher's Description
Published by Aperture in 1982 and long unavailable, Stephen Shore's legendary Uncommon Places has influenced a generation of photographers. Among the first artists to take color beyond advertising and fashion photography, Shore's large-format color work on the American vernacular landscape stands at the root of what has become a vital photographic tradition. Uncommon Places: The Complete Works presents a definitive collection of the original series, much of it never before published or exhibited. Like Robert Frank and Walker Evans before him, Shore discovered a hitherto unarticulated version of America via highway and camera. Approaching his subjects with cool objectivity, Shore's images retain precise internal systems of gestures in composition and light through which the objects before his lens assume both an archetypal aura and an ambiguously personal importance. In contrast to Shore's signature landscapes with which 'Uncommon Places' is often associated, this expanded survey reveals equally remarkable collections of interiors and portraits. As a new generation of artists expands on the projects of the New Topographic and New Color photographers of the seventies-Thomas Struth (whose first book was titled Unconscious Places), Andreas Gursky, and Catherine Opie among them-Uncommon Places: The Complete Works provides a timely opportunity to reexamine the diverse implications of Shore's project and offers a fundamental primer for the last thirty years of large-format color photography.
ISBN: 9781931788342
Publisher: Aperture
Hardcover : 188 pages
Language: English
Dimensions: 10.8 x 13.3 x 0.9 inches