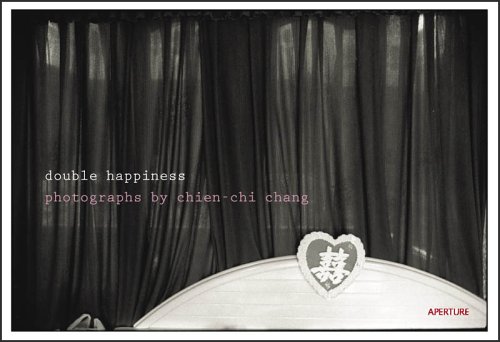 Chien-Chi Chang: Double Happiness
by Chien-Chi Chang
Publisher's Description
For Taiwanese photographer Chien-Chi Chang, Double Happiness is an extremely personal project: “For years, my folks had been bugging me to get married,” he says, “and I wanted to show them how I view marriage in Taiwan. I’m not anti-marriage . . . but I had to do something to protest.” That was in 1994, and thus began Chang’s fascination with the Taiwanese wedding industry. Double Happiness is the maturation of this original impetus. His first work on the topic was classically photojournalistic in approach, following the mainstream wedding industry as it manufactured strangers into brides and grooms. Almost ten years later, the work and his approach has evolved enormously, resulting in a body of work that addresses the fringes of the wedding industry: the voluntary importation of women from Vietnam and other poorer Asian countries into Taiwan for the purpose of brokered marriages. A selection of young women are displayed to the men who sign up for the service; if a man chooses one of the girls and she accepts the proposal, the marriage takes place within three days. The marriage broker handles the entire affair from selection process to ceremony. Chang offers a series of scenarios following the process: selection, application and paperwork, ceremony. The images are accompanied by interviews with the brokers, the men and women, and sample “interviews” that take place between the potential bride and grooms as they determine the suitability of their partners. Chien-Chi Chang was born in 1961 in Taiwan. Over the past decade, he has worked in New York’s Chinatown, documenting the lives of immigrants there. These pictures have appeared in National Geographic magazine, as well as the New Yorker, Time, and German GEO. The series earned Chang first place in the category “Daily Life Story” from World Press Photo in 1999. That same year, Chang won a grant from the W. Eugene Smith Memorial Fund for humanistic photography and was awarded the Visa d’Or in magazine photography in Perpignan. He was named the Missouri/NPPA 1999 Magazine Photographer of the Year. His previous publication, The Chain (2001) is a collection of portraits made of inmates in a mental asylum in Taiwan. He has exhibited at the Taipei Fine Arts Museum, The Venice Biennale, and the São Paolo Bienal, and at the International Center of Photography. Chang is a member of Magnum Photos.
ISBN: 1931788561
Publisher: Aperture
Hardcover : 160 pages
Language: English