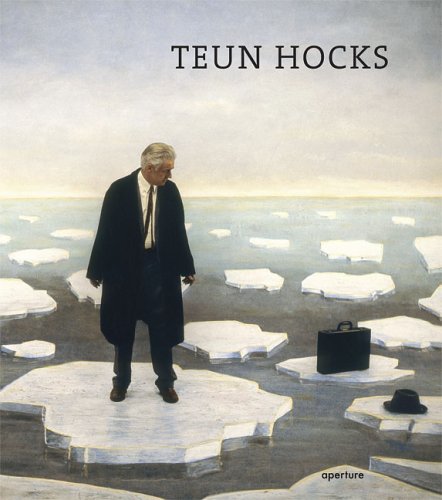 Teun Hocks
by Teun Hocks
Publisher's Description
Though Dutch artist Teun Hocks—performer, photographer, painter—is widely known and shown around the world, this will be his first English-language book. In it, Hocks plays his signature role, which Janet Koplos describes as “an innocent Everyman in an always strange and often funny world”, in scenes that range from burlesque to tragicomic. His lonely Buster Keaton-like persona perseveres through odd and unforgiving environments, struggling to find stable ground in an unstable, even absurd, universe. Life’s complications and challenges take the form of impossible Rube Goldbergian contraptions fraught with psychological implications. Each engaging image captures one moment of an implied narrative, triggering questions about how the protagonist ever got himself into such a fix and what in the world will happen next. Hocks begins by sketching out various one-man narratives, and then poses himself in a carefully plotted setup against his own painted backdrop. After photographing the scene, he paints in oil on top of the resulting oversize gelatin silver print. In addition to his painted photographs, Teun Hocks includes drawings, Polaroids and studio shots that illuminate the artist’s creative process. The wit, elaborate technique and rich colors of Hocks’s images combine to form an irrepressibly original oeuvre.
ISBN: 1931788782
Publisher: Aperture
Hardcover : 96 pages
Language: English
Dimensions: 0 x 0 x 0 inches