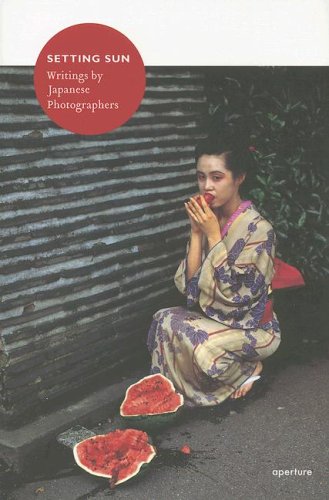 Setting Sun: Writings By Japanese Photographers
by Ivan Vartanian
Publisher's Description
The recent rise in the West of Japanese photography makes Setting Sun a crucial document. The first anthology of its kind to appear in English, this book collects key texts written from the 1950s to the present by the country’s most celebrated and controversial photographers, and illuminates a set of ideas, rules, and aesthetics that are specific to Japanese culture, but often little known elsewhere. Contributors include Takuma Nakahira and Daido Moriyama, in whose landmark late-60s magazine Provoke a radically new direction in Japanese photography was set; Nobuyoshi Araki, the provocative and prolific chronicler of bound girls (among other subjects); and Eikoh Hosoe, whose collaborations with the Butoh dance master Hijikata and the novelist Mishima made him prominent as an intellectual figure as well as a photographer. In addition, there are selections from modern masters such as Masahisa Fukase, Takashi Homma, Takuma Nakahira, and Hiroshi Sugimoto. Each chapter in the book is devoted to a central theme that is particular to Japanese photography, such as the role of nostalgia in a culture that has often sought to jettison its past amid the shadows of a war lost. The writings vary in form from diary entry to scholarly treatise, but all reflect a clear connection between word and image, one so essential that no comprehensive consideration of Japanese photography can be complete without it.
ISBN: 1931788839
Publisher: Aperture
Hardcover : 224 pages
Language: English
Dimensions: 6 x 8.9 x 0.8 inches