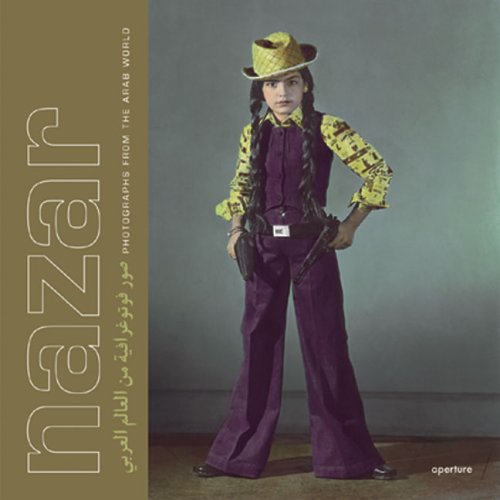 Nazar: Photographs from the Arab World
by Wim Melis
Publisher's Description
In an essay here, cultural critic and curator Negar Azimi articulates a singular problem of being a photographer in the Arab Middle East. 'Taswir' (or picture making), according to many Arab scholars, is prohibited by Muslim law, thus the 'notorious adage 'mamnous el taswir' (forbidden to photograph) . . . Exists in ubiquitous fashion, seemingly at every turn of the photographer’s visual field.' Keeping that in mind makes this unprecedented and multifaceted view of the Arab world as seen through the eyes of 56 Arab and Western photographers, the only current survey of its kind, an especially stimulating collection.

Western readers will be introduced to multiple generations of photographers (male and female) previously little known outside the Middle East. Originally assembled for the highly acclaimed exhibition Nazar at the Noorderlicht Festival in the Netherlands, these pictures comprise the largest compilation of Arab photographs ever exhibited in the West. Covering both documentary and fine art photography and ranging from North Africa to Lebanon and Palestine, from Iraq to Syria and Saudia Arabia, this book will open an often shuttered world. For example, Nadia Benchallal, who has assisted Annie Liebowitz and Arthur Elgort, offers black-and-white portraits of people who straddle Algerian-French culture, and Randa Shaath has recorded, from her high-rise apartment in Cairo, the lives of a shadow society of rooftop dwellers in the city. Nazar, which means 'seeing, insight, reflection' in Arabic, challenges preconceptions and reveals a complexity of Arab life not glimpsed on the nightly news.
ISBN: 1931788855
Publisher: Aperture
Hardcover : 268 pages
Language: English
Dimensions: 9.2 x 9.3 x 1.3 inches