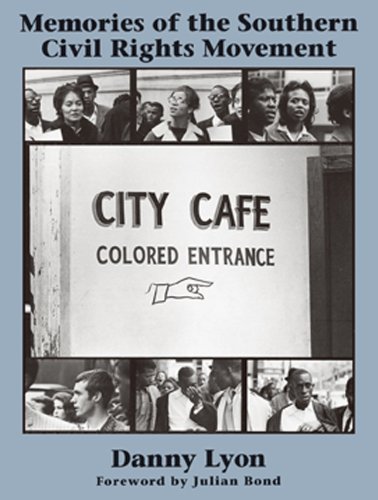 Memories of the Southern Civil Rights Movement
by Danny Lyon
Publisher's Description
In the summer of 1962, Danny Lyon packed a Nikon Reflex and an old Leica in an army bag and hitchhiked south. Within a week he was in jail in Albany, Georgia, looking through the bars at another prisoner, Martin Luther King, Jr. Lyon soon became the first staff photographer for the Atlanta-based Student Nonviolent Coordinating Committee (SNCC), which already had a reputation as one of the most committed and confrontational groups fighting for civil rights.

'This young white New Yorker came South with a camera and a keen eye for history. And he used these simple, elegant gifts to capture the story of one of the most inspiring periods in America’s twentieth century.'
- US Congressman, John Lewis

Memories of the Southern Civil Rights Movement was originally published in 1992 as part of the Lyndhurst Series on the South by the Center for Documentary Studies at Duke University and the University of North Carolina Press.
ISBN: 1931885885
Publisher: Twin Palms Publishers
Hardcover : 196 pages
Language: English
Dimensions: 12.2 x 9.2 x 1 inches