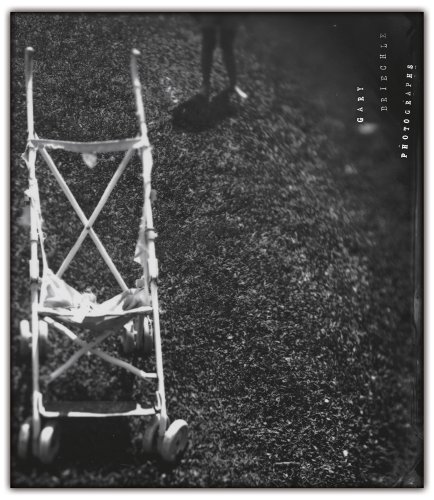 Gary Briechle
by Jack Woody
Publisher's Description
The rocky coast of Maine is where Briechle found himself driven to make pictures, using the wet-plate collodion process, of the individuals who constitute his stand-in family. “I've been in Maine close to eight years now and there are some people I've photographed for the entire time. A few have died and I've shot their likenesses tattooed on the chests of those they've left behind.”

“The last time I photographed Arizona (an eight year-old girl that I've been photographing since she was one) I did what I always do: I taped a black Wal-mart sheet to the house, set the camera up on the tripod and got her to lean back with shoulders touching to steady herself. I usually put a little flower by the lens, so she can fix her eyes on something during the fifteen-second exposure. This time, the end of October, it was a small, bright, red leaf.

A minute later, as I poured fixer over the glass, an image appeared out of a swirl of watery blue-green. Even though I had done this countless times before, what I saw was an image I never saw before.”