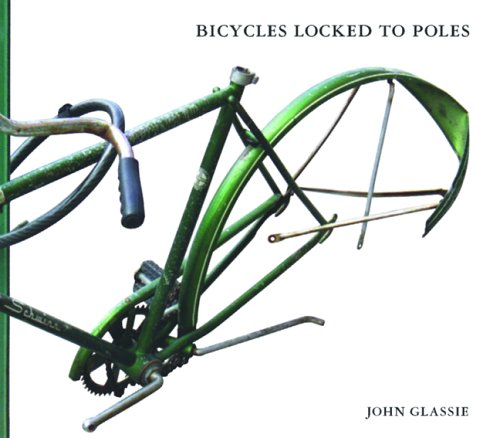 Bicycles Locked to Poles
by John Glassie
Publisher's Description
This mournful but pleasing collection features many of the best photographs of bicycles locked to poles ever taken. Shot using a old fashioned 35mm Nikon, and in many cases by waiting days for Alternate-Side-of-the-Street parking regulations to take effect, the photos here follow in the tradition of John James Audubon, Bernd and Hilla Becher, the Peterson Field Guides, and The Observers Book of Steam Locomotives. Bicycles Locked to Poles began in early 2001, when a magenta arrow-spray-painted on the sidewalk by a representative of the electrical utility-pointed directly to the sadly bent, Dali-esque wheel of a bicycle on the photographer's street. Glassie passed by every day for months, until one day it was gone. He has been documenting bicycles (bent, broken, and otherwise) locked to poles in and around his East Village neighborhood of New York ever since.

This volume presents a careful selection from Glassie's collection of over a thousand color photographs, as well as a graphical guide to present, damaged, and missing bicycle parts and a quote from Marvin Minsky's The Society of Mind. Bicycles Locked to Poles is a rare treasury for anyone interested in bikes, poles, locks, or the forgotten artifacts of the urban landscape.
ISBN: 1932416250
Publisher: McSweeney's
Paperback : 87 pages
Language: English
Dimensions: 8.9 x 7.9 x 0.4 inches