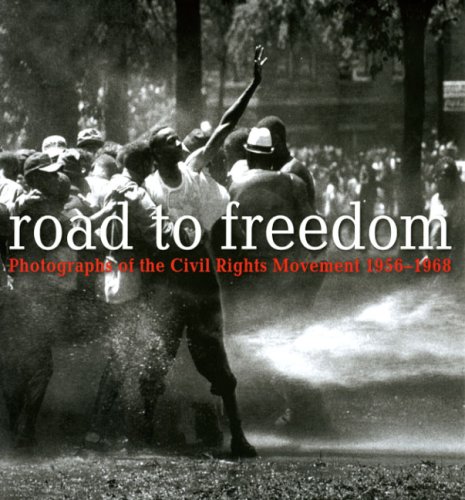 Road to Freedom: Photographs of the Civil Rights Movement, 1956-1968
by Charles Johnson
Publisher's Description
The direct action social protest movement of the 1950s and 1960s resulted in sit-ins, marches, and other showdowns with armed police officers and National Guardsmen. Trained in Dr. Martin Luther King Jr.'s methods of nonviolence, young black men and women took to the streets to fight for their civil rights and sparked a social revolution unlike anything the nation had experienced. Thousands of acts of courage were undertaken in the pursuit of freedom - acts that were often photographed, leaving behind a disquieting visual record of this violent and tumultuous period in American history.

Road to Freedom: Photographs of the Civil Rights Movement, 1956-1968 is the most significant exhibition of civil rights photographs presented in an art musuem in more than twenty years. These images were taken by many photographers-photojournalists, artists, movement photographers, and amateurs alike - all of whom seem to have had a keen understanding of the significance of their subject. This publication presents a narrative of some of the key moments of the civil rights movement, including the Freedom Rides of 1961, the Birmingham hosings of 1963, and the Selma to Montgomery March of 1965. These are the unforgettable images that helped to change the nation, increasing the momentum of the nonviolent movement by dramatically raising awareness of injustice and the struggle for equality.
ISBN: 1932543236
Publisher: High Museum of Art
Hardcover : 152 pages
Language: English
Dimensions: 0 x 0 x 0 inches