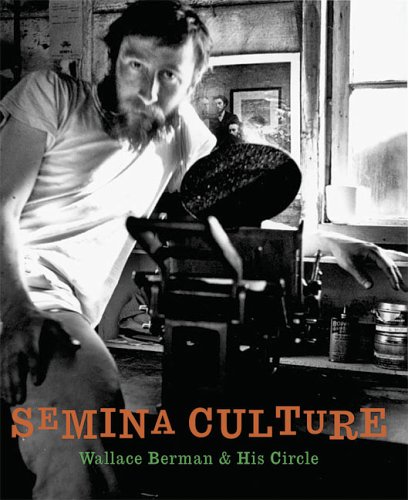 Semina Culture: Wallace Berman & His Circle
by Elsa Longhauser
Publisher's Description
The quintessential visual artist of the Beat era, Wallace Berman (1926-1976) remains one of the best kept secrets of the late 20th century. A crucial figure in California's postwar underground, Berman was a catalyst who traveled through many different worlds, transferring ideas and dreams from one circle to the next. His larger community is the subject of Semina Culture: Wallace Berman & His Circle, a catalogue to the exhibition organized by the Santa Monica Museum of Art including previously unexhibited works by 52 artists. Anchoring this publication is Semina, a free-form art and poetry journal that Berman published in nine issues between 1955 and 1964. Although privately made and distributed to a mere handful of friends and sympathizers, Semina is a brilliant compendium of the most interesting artists and poets of its time. Showcasing the individuals who came to define a still potent strand of post-war beat counter-culture, Semina Culture subtly outlines the energies, values, and foibles of this fascinating circle. Also reproduced here are works by various artists and writers who appear in Berman's own photographs-approximately 100 of which were recently developed from vintage negatives, and will be seen here for the first time.
ISBN: 1933045108
Publisher: D.A.P./Santa Monica Museum of Art
Hardcover : 384 pages
Language: English