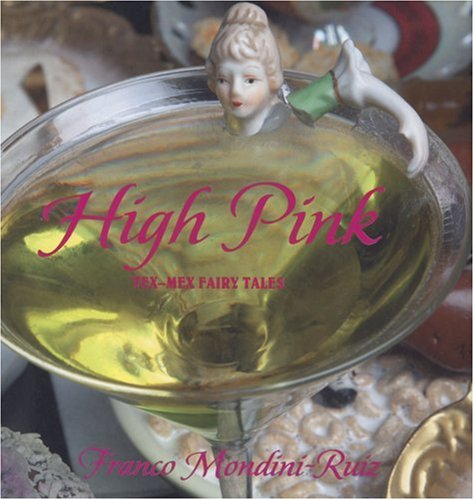 Franco Mondini-Ruiz: High Pink: Tex-Mex Fairy Tales
by Sandra Cisneros
Publisher's Description
Stepping into Franco Mondini-Ruiz’s world, one would have to be very, very careful not to trip over his porcelain figurine collection. The Tejano artist creates intricate vignettes composed of a vast array of found objects and knickknacks such as costume jewelry, plastic cakes and treats, used ice-cream cups, miniature ceramic figurines, cigarette butts and much, much more. Some of his works toy with language to make witty one-liners about cultural biases. For example, in his piece entitled, Cheeses of Nazareth-among the most playful and pointed of his assemblages-a wedge of cheese propped up by a toothpick-sized stake provides shelter for a tiny plastic Nativity scene that sits upon a larger Parmesan round. One of many verbal-visual puns, Cheeses of Nazareth creates a hilarious confrontation of ritual and subversion through its gesture toward traditional altarpieces found in Mexican folk art.

Viewers might peer closely at his installations as if to ask: 'Why is that 19th-century woman with the broken arm bathing in a martini glass?,' or, 'Are those pancakes?,' or maybe just to indulge in the pieces’ playfulness. Mondini-Ruiz's art is truly a clever meeting of high and low, but the real insight of his work is the ability to expose sober meaning through laughter.

High Pink further illustrates the meanings behind and within his visual works with 56 often-hilarious stories by the artist that illuminate the cultural divides and bonds that he faced and created during his Tex-Mex childhood. Each story is accompanied by an image of one of Mondini-Ruiz’s installations, and this pairing, along with sparkling original text from author Sandra Cisneros, creates an entertaining book with broad cultural, artistic, and linguistic appeal.
ISBN: 1933045124
Publisher: D.A.P./Distributed Art Publishers, Inc.
Hardcover : 126 pages
Language: English
Dimensions: 7.5 x 7.5 x 0.6 inches