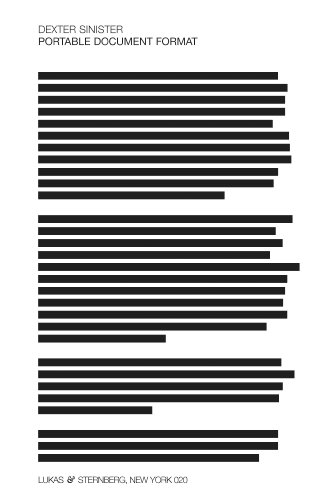 Over the past few years, Dexter Sinister has been interested in exploring contemporary publishing in its broadest, most exploded sense. The first part of this book consists of pieces of writings written since the conception of their New York basement workshop and bookstore in the summer of 2006. These writings were previously published online as PDFs in the Library at www.dextersinister.org. They were primarily written by Dexter Sinister or by one of a circle of regular collaborators, often for their house journal Dot Dot Dot, or as supplements to other books or exhibitions.

The second part consists of reproductions of a series of lithographic proof prints. Accompanying these prints are extended captions individually produced for different exhibitions in 2008. Each caption was composed in line with the manner of its accompanying image. Although never intended as a set, a number of generic themes emerged, such as abstraction, mathematics, logic, and cooperation. The book intends to demonstrate how ideas from the first part have been rechannelled in the second.
ISBN: 1933128852
Publisher: Sternberg Press
Hardcover : 200 pages
Language: English