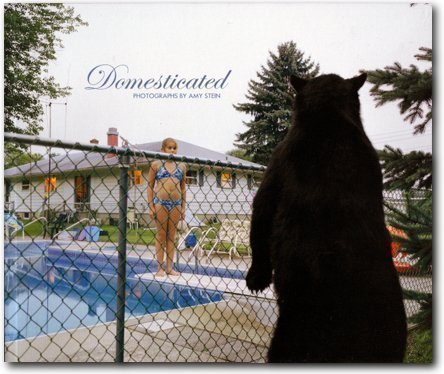 Domesticated: Photographs by Amy Stein
by Amy Stein
Publisher's Description
Amy Stein crafts photographic allegories set simultaneously in a number of different liminal spaces. Her sure and realistic color works manifest the place where the human-built meets the wild, but in addition they show us where the factual descriptive image meets fiction. Despite their apparent realism, her images are posed and constructed, sometimes using models and taxidermy props, sometimes using the bodies of dead or living animals to re-create, record and perform actual events that occurred in the small Pennsylvania town of Matamoras, which Stein has claimed as surely as Faulkner invented and limned Yoknapatawpha County. What at first appears to be a series of photojournalistic decisive moments is revealed, at a second look, to be a powerfully imagined vision that establishes its strength through its very artificiality.
ISBN: 1934334049
Publisher: Photolucida
Paperback : 64 pages
Language: English