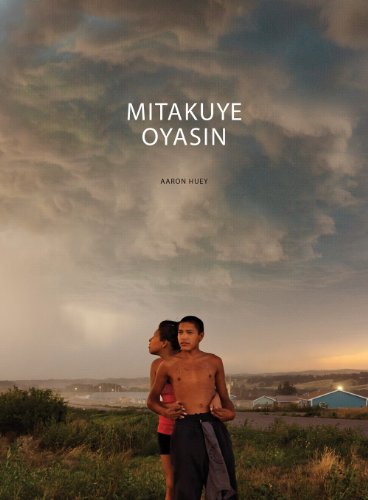 Aaron Huey: Mitakuye Oyasin
by Aaron Huey
Publisher's Description
The Pine Ridge Indian Reservation, once known as American POW Camp #344, is a sprawling area of land that encompasses part of the Lakota Sioux tribe’s traditional homeland, the Black Hills of South Dakota. Sadly, Pine Ridge is now the quintessential example of the failure of the reservation system with staggering statistics on everything from violent crime to education. The unemployment rate is nearly 90% and the life expectancy for men is 48, roughly the same as Afghanistan and Somalia.

In this powerful new book of photographs, Aaron Huey portrays both the broken social landscape and the ceremonial warrior culture that permeates Pine Ridge today. This body of work goes far beyond the obvious poverty and into the world of the tribe’s visions and dreams. Huey, a photographer who has covered war and crises in some of the most far-flung places on the planet for magazines like the New Yorker and The New York Times, stumbled upon Pine Ridge seven years ago. Since then he has created one of the single largest bodies of work on a contemporary Indian Reservation. His images stand as a chilling testament to the complexity and difficulties facing the Lakota Sioux tribe and all indigenous people.
ISBN: 1934435511
Publisher: Radius Books
Hardcover : 208 pages
Language: English
Dimensions: 0 x 0 x 0 inches