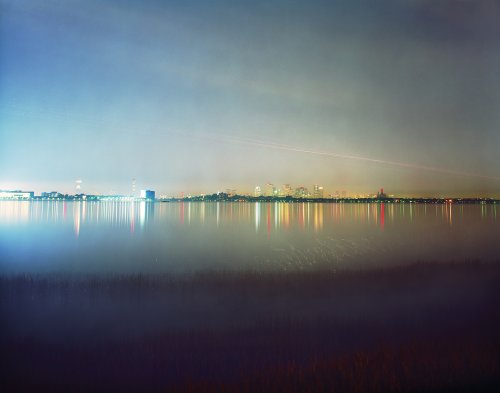 Christina Seely: Lux
by Christina Seely
Publisher's Description
For most of human history, man-made light has signified hope and progress. Christina Seely’s Lux examines the contemporary disconnect between the beauty of the artificial light that emanates from the earth’s surface and the complexity of what this light represents. Made between 2005 and 2010, and titled after the unit for measuring illumination, the project focuses on light produced by 45 cities in the United States, Western Europe, China and Japan-the most brightly illuminated regions on NASA maps of the earth at night. These economically and politically powerful regions have the greatest impact not only on the night sky but also on the planet’s ecology. Seely’s portraits are less about the individual locations and more about the global ramifications of consumption, and for this reason each photograph is titled simply “Metropolis,” with a notation of the city’s latitude and longitude. The book also includes a fold out NASA map.
ISBN: 193443566X
Publisher: Radius Books
Hardcover : 120 pages
Language: English
Dimensions: 0 x 0 x 0 inches