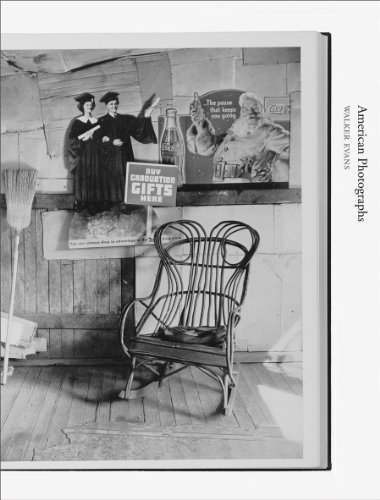 Walker Evans: American Photographs (Books on Books)
by Walker Evans
Publisher's Description
Publisher Marketing Walker Evans' 'American Photographs' is widely deemed the most important photobook ever published. Originally conceived to be a catalogue to accompany his one-man show at The Museum of Modern Art in 1938 (the first solo show MoMA had given to a photographer), it quickly became a document so definitive of its era that curator John Szarkowski wrote that 'it was difficult to know now whether Walker Evans recorded the America of his youth, or invented it.' The book opens with images that cite photography, immediately establishing a tension between medium and message, although it is certainly for the message that Evans has become famous: 'American Photographs' points over and over again to the unhappy lot of the poor and the dispossessed in 1930s America. Lincoln Kirstein's accompanying essay (famous in its own right) declares: 'What poet has said as much? Only newspapers, the writers of popular music, the technicians of advertising and radio have, in their blind energy accidentally, fortuitously, evoked for future historians such a powerful monument to our moment. And Evans' work has, in addition, intention, logic, continuity, climax, sense and perfection.' 'American Photographs' continues to go out of print for long stretches of time, and the first edition of Errata's 2009 spread-by-spread reprint followed suit. This revised edition of that volume presents the original 1938 edition with its 87 legendary black-and-white photographs (reproduced in full-page rather than quarter-page spreads), the classic Kirstein essay and a contemporary essay by Evans scholar John T. Hill. Born in St. Louis, Missouri, Walker Evans (1903-1975) took up photography in 1928. His book collaboration with James Agee, 'Let Us Now Praise Famous Men' (1941), which portrayed the lives of three white tenant families in southern Alabama during the Depression, has become one of that era's most defining documents. Evans joined the staff of 'Time' magazine in 1945, and shortly after moved to 'Fortune,' where he stayed until 1965. That year, he became a professor of photography at the Yale University School of Art. Evans died at his home in Old Lyme, Connecticut, in 1975. The Errata Editions' 'Books on Books' series is an ongoing publishing project dedicated to making rare and out-of-print photography books accessible to students and photobook enthusiasts. These are not reprints or facsimiles but complete studies of the original books. Each volume in the series presents the entire content, page for page, of an original master bookwork which, up until now, has been too rare or expensive for most to experience. Through a mix of classic and contemporary titles, this series spans the breadth of photographic practice as it has appeared on the printed page and allows further study of the creation and meanings of these great works of art. Each volume in the series contains illustrations of every page in the original photobook, a new essay by an established writer on photography, production notes about the creation of the original edition and biographical and bibliographical information about each artist.
ISBN: 1935004247
Publisher: Errata Editions
Hardcover : 152 pages
Language: English
Dimensions: 7.2 x 9.8 x 0.8 inches