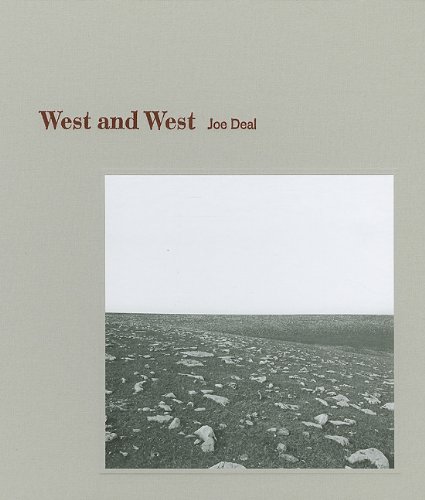 West and West: Reimagining the Great Plains (Center for American Places - Center Books on American Places)
by Joe Deal
Publisher's Description
The Kansas-Nebraska Act of 1854 officially opened the Great Plains to westward settlement, and the public survey of 1855 by Charles A. Manners and Joseph Ledlie along the Sixth Principal Meridian established the grid by which the uncharted expanse of the Great Plains was brought into scale. The mechanical act performed by land surveyors is believed by photographer Joe Deal to be powerfully similar to the artistic act of making a photograph.To Deal, both acts are about establishing a frame around a vast scene that suggests no definite boundaries of its own. Thus, when approaching his own photographs of the Great Plains, Deal viewed his photography as a form of reenactment, a method of understanding how it felt to contain the Great Plains in smaller, more measurable units.

In West and West, Deal, who was born and raised in Kansas, revisited the Kansas-Nebraska territory and applied his photographic understanding of the landscape grid and horizon line to illuminate the sense of infinite space that transcends the reality of the survey. As Deal writes in his concluding essay: “If the square, as employed in the surveys of public lands, could function like a telescope, framing smaller and smaller sections of the plains down to a transect, it can also be used as a window, equilaterally divided by the horizon, that begins with a finite section of the earth and sky and restores them in the imagination to the vastness that now exists as an idea: the landscape that is contained within the perfect symmetry of the square implies infinity.”

The stunning photographs in West and West present the Great Plains from a rare perspective. From this vantage point, Deal is able to distill and contemplate its expanse.