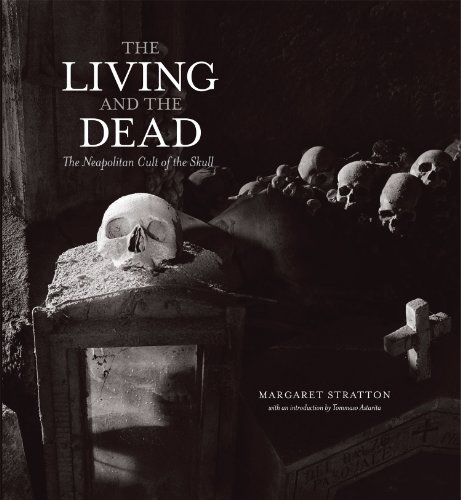 The Living and the Dead: The Neapolitan Cult of the Skull (Center Books on the International Scene)
by Margaret Stratton
Publisher's Description
Snaking beneath the streets and crumbling churches of Naples is a vast system of ancient catacombs and aqueducts, many lined with skulls in seemingly endless rows stretching far back into the depths of the caverns. In The Living and the Dead, Margaret Stratton provides an unusual photographic record that documents these spaces in which Neapolitans of early Christian history sought to preserve emotional connections to the afterlife through rituals in which the tangible skull represents the ephemeral soul.

Among the remarkable underground cemeteries of Naples that Stratton captures in The Living and the Dead are the Catacombs of San Gennaro, the Catacomb San Gaudioso, and il Cimitero delle Fontanelle. Unlike typical early Christian catacombs, the catacombs of Naples were constructed more like underground cathedrals, with passageways so vast they could accommodate horse-drawn chariots, ox-carts, and large biers carrying many corpses. Strikingly, Stratton’s photographs show that, unlike the rigid class system that governed medieval Naples, the catacombs offer a virtually classless society, where noblemen and peasants were laid to rest side by side, their remains indistinguishable from one another.

The beautiful and solemn images of The Living and the Dead document the delicate reciprocity between death and the afterlife, between the living and the dead, and between the early history of Catholicism and pagan ritual.
ISBN: 1935195018
Publisher: Center for American Places
Hardcover : 80 pages
Language: English
Dimensions: 8.1 x 9.8 x 0.6 inches