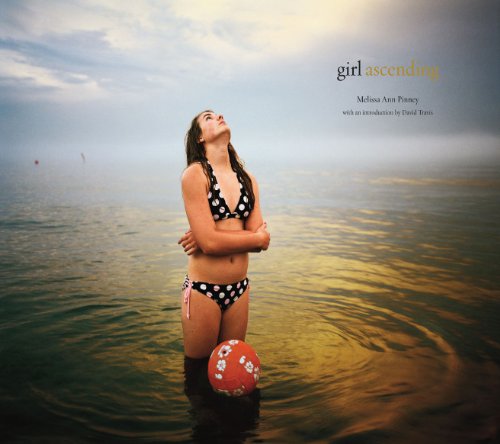 Girl Ascending (Center for American Places - Center Books on American Places)
by Melissa Ann Pinney
Publisher's Description
For nearly thirty years, Melissa Ann Pinney has been making photographs of girls and women, from infancy to old age, to portray how feminine identity is constructed, taught, and communicated. Pinney’s work depicts not only the rites of American womanhood, but also the informal passages of girlhood and adolescence. With each view—from solitary subjects in pensive moments to complex family and social situations—we gain a greater understanding of the connections between a daughter and her parents, grandparents, and the larger world of friends and society. Many of the images are epiphanies, in which the ordinary reveals an underlying significance. Thus, the passage of time, the cycle of the seasons, and young girls’ friendships and ties to the elders who guide them all capture Pinney’s attention. The pictures reflect the ways in which a girl’s world in 2010 differs from the world Pinney knew growing up in the 1960s and the ways in which the formation of self can transcend time and place.

Girl Ascending is a sequel to Pinney’s widely praised first book, Regarding Emma: Photographs of American Women and Girls. Of that previous book Janina Ciezaldo wrote in Aperture: “Pinney brings compositional integrity, knowledge of color, and a Midwestern richness of light to her inquiries…” These new photographs are even more accomplished, mature, and stylistically consistent. As David Travis, in his introduction, writes: “Infusing two worlds of being a girl and being a mother, or musing upon and understanding the visual properties of appearances, Pinney has regained that sense of wonder, making her view of girls ascending into young women both believable and enchanting.”

Pinney’s photographs are powerful and insightful. As social and artistic documents, they reveal the subtle and bold aspects of feminine identity as it is expressed in American spaces and places, both private and public. Girl Ascending is a major contribution to those who appreciate fine-art photography and women’s studies.
ISBN: 1935195115
Publisher: Center for American Places
Hardcover : 140 pages
Language: English
Dimensions: 11.3 x 10 x 0.8 inches