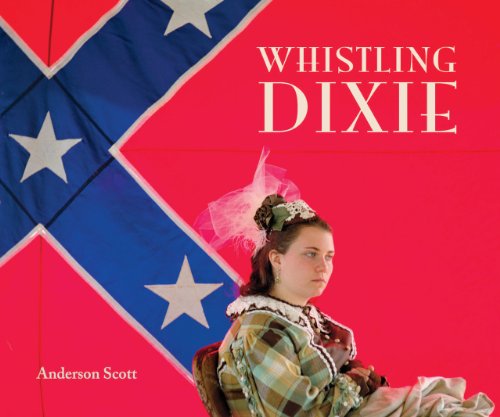 Whistling Dixie
by Anderson Scott
Publisher's Description
At hundreds of events held year-round across the southern United States, thousands of individuals spend their time, energy, and money recreating the battles of the Civil War. The number of participants involved ranges from tens to tens of thousands; those among them span the spectrum from casual spectators to amateur historians who seek to immerse themselves in the experience of living and fighting in the 1860s—from the cuisine to the very stitches in their uniforms.

With Whistling Dixie, photographer Anderson Scott captures these latter-day Confederates at a series of reenactments in the years leading up to the 2011 sesquicentennial of the Civil War. Always maintaining the perspective of a keen and sometimes ambivalent observer, Scott’s photographs convey the earnestness and enthusiasm of this subculture while exposing its idiosyncrasies and contradictions.

Scott’s photographs span the southern countryside, documenting reenactments in Georgia, Alabama, Tennessee, Florida, and the Carolinas as well as living histories and Confederate Memorial Days. An essay by Scott, describing his experience at a reenactment of the Battle of Selma, and a cultural essay by Chip Benson, of Yale University, provide context for the photographs and the subculture of their subjects.
ISBN: 1935195352
Publisher: Columbia College Chicago Press
Hardcover : 73 pages
Language: English
Dimensions: 10.2 x 12.5 x 0.7 inches