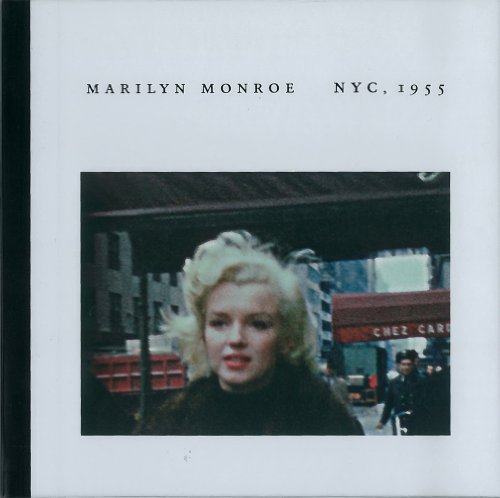 Marilyn Monroe: NYC, 1955: Photographs by Peter Mangone
by Jason Danziger
Publisher's Description
In 1955, peter Mangone was 14 years old—a skinny boy from the Bronx with a Marilyn Monroe fixation, like so many teenagers of his generation. What distinguished Mangone was that he got to meet his idol. For several months, he had played truant from school to stake out the Gladstone Hotel on Manhattan's east 52nd Street, where the 29-year-old Monroe was staying after her unhappy divorce from Joe Dimaggio and her dismissal from the twentieth-Century Fox studios. one morning, Mangone borrowed an eight-millimeter Kodak camera from his brother, headed down to the Gladstone and met Monroe as she was on her way out shopping with her friend Milton Greene. Mangone’s dream came true: she waved, winked and invited him along. over the course of the afternoon, he filmed her intermittently, without sound, later developing the film and viewing it at home. When Mangone left home, the footage went missing, and was thought to be lost—until 2002, when his brother found it among their father’s possessions, virtually in mint condition. “It was like refinding my high school sweetheart,” he said. “She was just the way I remembered her.” this book of stills from Mangone's five-minute movie shows the great screen siren in wonderful moments of unguardedness, against the Chevys and Checker cabs of 1950s midtown Manhattan. the great charm of Mangone's images lies at the opposite end of familiar portraits by Cecil Beaton, Elliott Erwitt and co.: in his 14-year-old hands, through the grainy Kodak film, with its erratic lighting, Marilyn remains every inch the icon.
ISBN: 1935202340
Publisher: Danziger Gallery/T.Adler Books
Hardcover : 48 pages
Language: English
Dimensions: 9.2 x 9.1 x 0.6 inches