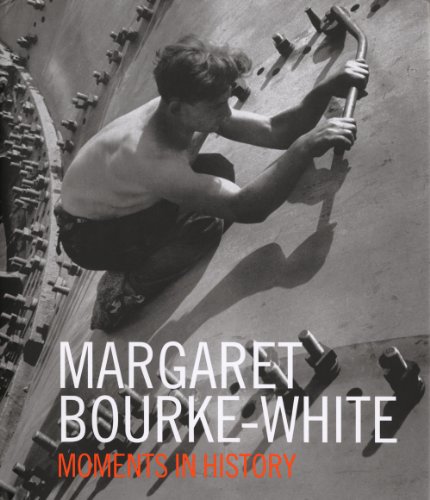 Margaret Bourke-White: Moments in History
by Oliva María Rubio
Publisher's Description
America’s first female war correspondent, Margaret Bourke-White was also something of a media star, with the portrait of her decked out in flying gear, camera in hand, about to set off on a bombing raid, being a favorite pin-up among U.S. forces. Focusing on the work Bourke-White made in the 1930s and 40s in Czechoslovakia, Germany, Italy, the Soviet Union and the U.K., Moments in History presents 150 classic photographs alongside revelatory extracts from letters and publications in periodicals. Bourke-White traveled to the USSR when the first Five-Year Plan was being implemented; she documented the German invasion of the Soviet Union in 1941, and the Allied bombing of Germany. In the summer of 1945 she was commissioned by Life to make a photographic record of the destroyed German cities. She was present at the liberation of the Buchenwald concentration camp and the Leipzig-Thekla forced labor camp. She recorded the partition of India and the Korean War, and one of her most famous pictures of this period is “Gandhi,” which shows the subject at his spinning wheel. Also included in the catalogue are some of the word–picture sequences Bourke-White did for Fortune and Life, as well as extracts from her correspondence with personalities from the worlds of politics and culture, such as Winston Churchill and Georgia O’Keeffe. Bourke-White wanted to be the “eyes of the age,” and her pictures testify to (as she put it) her “unquenchable desire to be present when history is being made.”
ISBN: 1938922123
Publisher: D.A.P./La Fabrica
Hardcover : 192 pages
Language: English
Dimensions: 9 x 10.5 x 0.9 inches