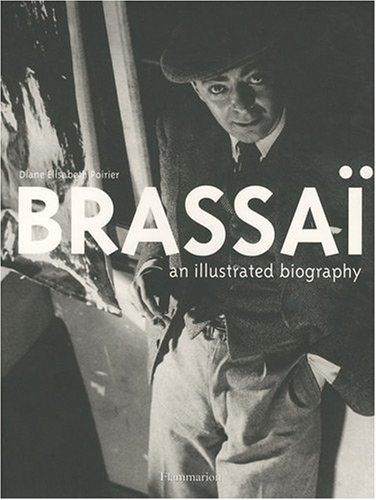 Brassai: An Illustrated Biography
by Diane Elisabeth Poirier
Publisher's Description
Brassai, born in Hungary as Gyula Halasz in 1894, began his artistic apprenticeship in Berlin before moving to Paris and launching a career that would establish him as a key figure in the evolution of photography. Brassai's importance as a photo-grapher was recognized early in his career, affording him a privileged position from which to witness the varied aspects and milieus of Parisian life during the 1920s and 1930s. During and just after the war, Brassai collaborated with other artists and writers, and displayed his own artistic proficiency in multiple domains including theater, cinema, sculpture, drawing, and writing. The late 1940s marked the beginning of a new period in Brassai's life, during which he married and became a naturalized French citizen. In the 1950s and early 1960s, he traveled extensively and executed his original graffiti compositions that would acquire international fame. Toward the end of his life, the artist returned to reading and writing.

Brassai, who remained at the cutting edge of avant-garde, refused to espouse a single style; his rich body of work exceeds definition. This illustrated biography is based largely on unpublished documents and photographs from the artist's personal archives. The author shares stories told to her by Brassai's wife Gilberte and by several of the artist's friends, including Henry Miller, Miro, Henri Michaux, and Raymond Queneau. Filtering a rich variety of sources, Brassai offers a detailed and multifaceted view of the artist's life and of the bonds that link him and his legendary images to Paris.
ISBN: 2080304976
Publisher: Flammarion
Paperback : 208 pages
Language: English
Dimensions: 9.4 x 12.3 x 0 inches