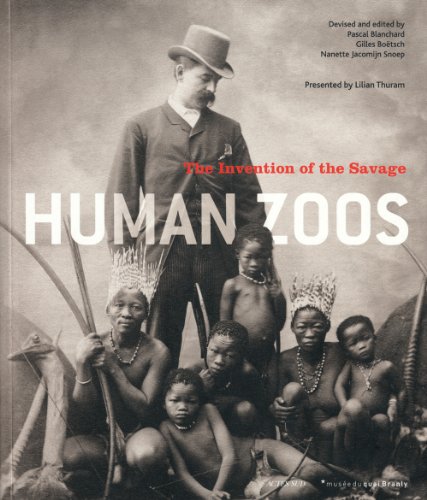 Human Zoos: The Invention of the Savage
by Paul Blanchard
Publisher's Description
Human Zoos offers a fascinating, sobering and macabre tour of man’s exploitation of man-that is, Western man’s exploitation of non-Western men and women-as recorded throughout the early history of photography, from the 1860s to the 1930s and the invention of “humane exhibiting” of nonwhite persons. Freak shows, the circuses of Buffalo Bill and P.T. Barnum and European colonial exhibitions provided the occasions for most of these images, several of which were incorporated into posters, postcards and other ephemera, designed with an improbable jauntiness. Human Zoos traces the evolution of such paradigmatic conceptions as “specimen,” “savage” and “native” for the designation of peoples as various as Native Americans, Asians and Africans from all corners of the continent. As horrific and compelling as it is brilliantly researched and compiled, this volume unflinchingly surveys the very recent history of the West’s arrogant abuse of those deemed to fall outside its brutal terms of civilization.