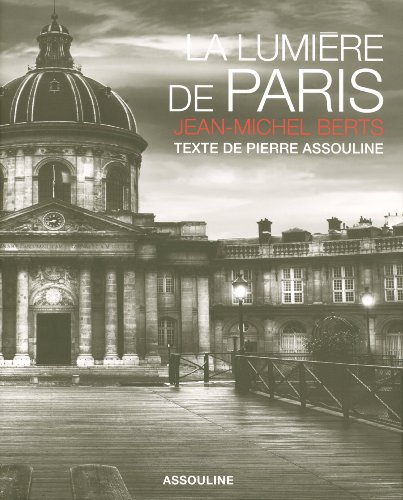 The Light of Paris (French Edition)
by Pierre Assouline
Publisher's Description
As king François I once said: 'Paris is not a city, it's a world.' Long after the swarming crowd has deserted it, at dusk or dawn, after the hum and buzz of traffic has subsided, Paris still resonates with a life of its own: muted, subdued, and mysterious. That's precisely the moment photographer Jean-Michel Berts has elected to capture it, in black and white. From Opera to Montmartre, along the banks of the Seine or its Grands Boulevards, stepping in the footprints of Baudelaire, Brassai, Huysmans, framed by Berts's camera obscura, the buildings, completely deserted streets, and even its trees and empty flights of stairs take on a poetic, ethereal, almost dream-like quality. Much more than a hymn to the City of Lights and featuring a beautiful text by Pierre Assouline, this book is a moving homage to Paris, seen as a virtuoso sculptor's masterpiece. Each of the prints are given ample breathing space in this volume, whose opulent trim size befits the spectacular quality of the shots.
ISBN: 284323882X
Publisher: Assouline
Hardcover : 131 pages
Language: French