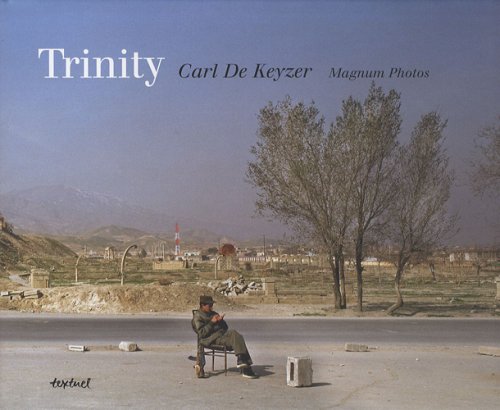 "Trinity ; photographies 1991-2007"
by Carl de Keyser
Publisher's Description
Trinity finds its source in the ethics of the photo essay, questioning the contribution of photography to history and the value of its testimony. The 97 color photographs by Carl De Keyzer highlight the precarious balance of power in the atomic age. The title makes reference discreetly: Trinity is the name of the site where the first nuclear bomb was tested. This book presents itself as a trilogy successively evoking History with the events of the last fifteen years, War with large areas of conflict, and Policy with places of power and strategic decision.

The first chapter, 'Tableaux d’histoire', refers to political paintings as supports to power, as tools of persuasion. The second chapter, 'Tableaux de guerre', brings together a series of photographs of the scene of conflict, battlefields, geopolitical crossroads. The panoramic photography captures the process of 'healing' injured places. Finally, the last chapter, 'Tableaux politiques', produced between 2003 and 2007 is inspired by paintings by representatives at cabinet meetings, portraits of politicians and governors.

Carl De Keyzer reinterprets the vocabulary of painting history and questions the frenzied media coverage of events. By allowing one to pause at each image, De Keyzer presents a reflection on history rather than a panorama of immediate current events.
ISBN: 284597261X
Publisher: TEXTUEL (ï¿½DITIONS)
Hardcover Language: French