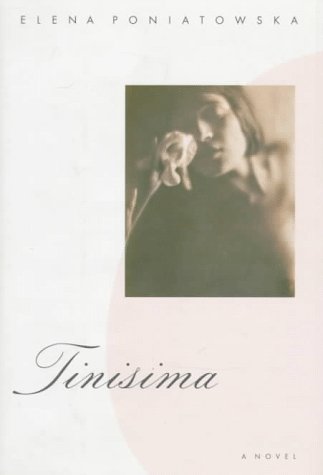 Tinisima
by Katherine Silver
Publisher's Description
From one of Mexico's leading literary figures comes this intriguing fictionalized biography of photographer and revolutionary Tina Modotti. Including numerous photographs of and by Modotti beginning each chapter, Tinisima vividly recounts Modotti's rise to fame, her associations with Edward Weston and Diego Rivera, her involvement with Mexican revolutionaries, and her subsequent exile to the USSR.
Amazon.com Review
Using quotations from actual letters, characters under their actual names, and events straight out of history, Mexican novelist Elena Poniatowska has reimagined the life of actress and Communist agent Tina Modotti. Modotti was the lover of photographer Edward Weston, the friend of Diego Rivera and other artists, and an agent for the Soviet Union during the murky events of the Spanish Civil War. Poniatowska brushes aside questions of morality and politics to present Tina Modotti as an impetuous romantic, a heroine regardless of the rightness of her cause. The Spanish Civil War forms the backdrop for the last and most dramatic stage of Modotti's life: she was the lover of Vittorio Vidali, who specialized in assassinating anti-Stalinist leftists. Regardless of the stature of the book as literature, it gives a portrait of one of the most fascinating characters on the world stage between the World Wars.
ISBN: 0374277850
Publisher: Farrar Straus & Giroux (T)
Hardcover : 357 pages
Language: English