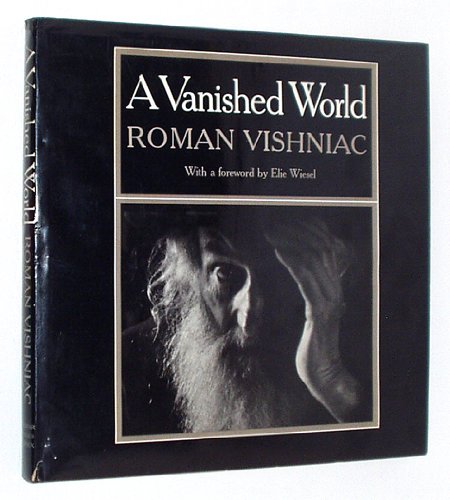 A Vanished World
by Roman Vishniac
Publisher's Description
This selection of Roman Vishniac's famous photographs of the Jews of Eastern Europe taken between 1934 and 1939 is a glimpse into a lost time. From Vishniac's own collection of over 16,000 photographs taken during this time, he was able to rescue only 2,000 and this book shows 200 of the best and most representative of his collection. Vishniac provides captions and commentaries that provide the context for these important documents.
Amazon.com Review
Roman Vishniac's A Vanished World is an extraordinary record of the lives of German and Eastern European Jews in the years immediately preceding the Holocaust. Vishniac, a Russian Jew, began to take photographs of village life during World War I, when Russian Jews who lived near the front were accused of being German spies and were deported to Siberia. He later moved to Germany, where he witnessed the horrible events of Kristallnacht and the anti-Jewish legislation that allowed Hitler to declare his enemies stateless and therefore unworthy of international protection. As we study Vishniac's photographs--a surviving fraction of the more than 16,000 he took--we are aware that we are seeing the faces of those soon to die, witnessing a world that has all but perished. Yet that world, of shops and schools, of busy streets and quiet farms, remains with us if only as a ghostly memory, thanks in part to Vishniac's compassionate eye.
ISBN: 0374282471
Publisher: Farrar, Straus and Giroux
Hardcover : 179 pages
Language: English