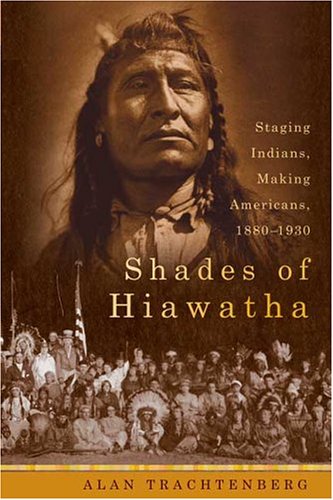 Shades of Hiawatha: Staging Indians, Making Americans, 1880-1930
by Alan Trachtenberg
Publisher's Description
A century ago, U.S. policy aimed to sever the tribal allegiances of Native Americans, limit their ancient liberties, and coercively prepare them for citizenship. At the same time, millions of new immigrants sought their freedom by means of that same citizenship. In this subtle, eye-opening work, Alan Trachtenberg argues that the two developments were, inevitably, juxtaposed: Indians and immigrants together preoccupied the public imagination, and together changed the idea of what it meant to be American. To begin with, programs of 'Americanization' were organized for both groups, even as Indians were celebrated as noble 'First Americans' and role models. Trachtenberg traces the peculiar effect of this implicit contradiction, with Indians themselves staging The Song of Hiawatha (which was also translated into Yiddish); Edward Curtis's poignant photographs memorializing their vanishing heroism; and the Wanamaker department store making a fortune from commercialized versions of their once reviled cultures. By 1925 the national narrative had been rewritten, and citizenship was granted to Indians as a birthright, while the National Orgins Act began to close the door on immigrants. In Shades of Hiawatha, Trachtenberg eloquently suggests that we must re-create America's tribal creation story in new ways if we are to reaffirm its beckoning promise of universal liberty.
ISBN: 0374299757
Publisher: Hill and Wang
Hardcover : 400 pages
Language: English