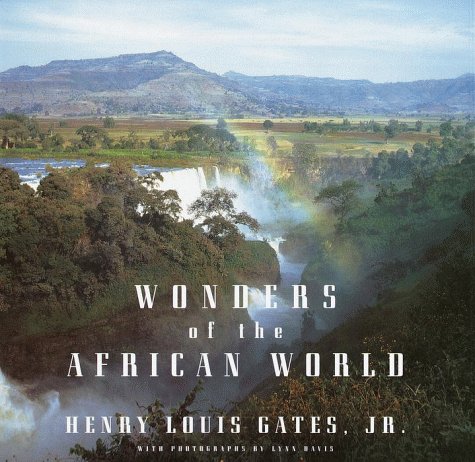 Wonders of the African World
by Henry Louis Gates Jr.
Publisher's Description
This companion volume to the PBS Television Series of the same name is a superb example of scholarly text combined with superb photography. Henry Louis Gates, Jr., is the W.E.B. Du Bois Professor of Humanities and the chair of the Department of Afro-American Studies at Harvard. He has written frequently for The New Yorker and is the author of seven books. Lynn Davis needs no introduction to those familiar with the contemporary photography scene. She was commissioned to photograph especially for this project and the work is stunning. Full page bleeds of her images dot this book and lend a monumental quality to the overall presentation. This title is definitely one of the notable contributions to photography and book arts this year.
Amazon.com Review
In the 1920s, Harlem Renaissance poet Countee Cullen asked, "What is Africa to me?" Wonders of the African World, a stunning African travelogue by Harvard's Henry Louis Gates Jr. (arguably America's most public and prolific black intellectual), takes up that question for a new generation. A beautifully illustrated, literary companion to a PBS documentary series, Wonders traces Gates's 10-month sojourn through the African motherland, from the haunting pyramids of the Egyptian/Nubian empire in Sudan and the ancient Christian heritage of Ethiopia to the lost city of Timbuktu and the fabled University of Sankore. Erudite scholar that he is, Gates uses his trip to investigate the promise and perils of contemporary Africa, considering, among other issues, the unifying potential of the Swahili language and black complicity in the slave trade. Gates also takes aim at the Enlightenment, the subsequent colonialist occupations by European nations, and the worst aspects of Afrocentrism. Ultimately, he reveals an unbreakable, albeit ill-defined, relationship between Afro-Americans and Africans: "I have learned that I am neither Fon nor Beninian, Asante nor Ghanian, Swahili nor Kenyan, Nubian or Sudanese," Gates writes. Though not a member of any one of these great peoples in particular, I am, as a descendant of a West African slave and of ex-slaves, the product of a truly Pan-African new world culture forged out of the crucible of slavery." --Eugene Holley Jr.
ISBN: 0375402357
Publisher: Knopf
Hardcover : 288 pages
Language: English