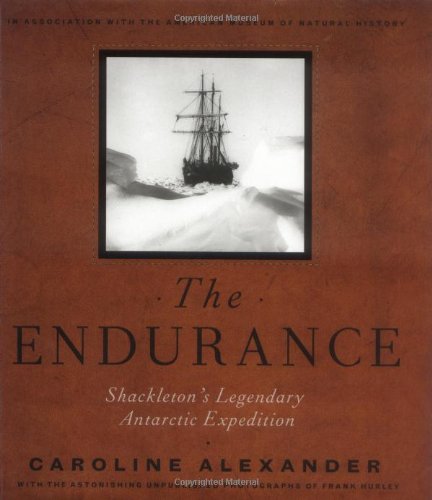 The Endurance: Shackleton's Legendary Antarctic Expedition
by Caroline Alexander
Publisher's Description
Marooned on an icepack in Antarctica, days before the outbreak of WWI, Ernest Shackleton and his crew spent nearly two years awaiting rescue. This remarkable story and the stark photographs made by crew member Hurley document a near tragedy of the last great explorations before the space race began.
Amazon.com Review
Melding superb research and the extraordinary expedition photography of Frank Hurley, The Endurance by Caroline Alexander is a stunning work of history, adventure, and art which chronicles "one of the greatest epics of survival in the annals of exploration." Setting sail as World War I broke out in Europe, the Imperial Trans-Antarctic Expedition, led by renowned polar explorer Sir Ernest Shackleton, hoped to become the first to cross the Antarctic continent. But their ship, Endurance, was trapped in the drifting pack ice, eventually to splinter, leaving the expedition stranded on floes--a situation that seemed "not merely desperate but impossible."

Most skillfully Alexander constructs the expedition's character through its personalities--the cast of veteran explorers, scientists, and crew--with aid from many previously unavailable journals and documents. We learn, for instance, that carpenter and shipwright Henry McNish, or "Chippy," was "neither sweet-tempered nor tolerant," and that Mrs. Chippy, his cat, was "full of character." Such firsthand descriptions, paired with 170 of Frank Hurley's intimate photographs, which are comprehensively assembled here for the first time, penetrate the hulls of the Endurance and these tough men. The account successfully reveals the seldom-seen domestic world of expedition life--the singsongs, feasts, lectures, camaraderie--so that when the hardships set in, we know these people beyond the stereotypical guise of mere explorers and long for their safety.

Alexander reveals Shackleton as an inspiring optimist, "a leader who put his men first." Throughout the grueling ordeal, Shackleton and his men show what endurance and greatness are all about. The Endurance is a most intimate portrait of an expedition and of survival. Readers will possess a newfound respect for these daring souls, know better their unthinkable toil and half-forgotten realm of glory. --Byron Ricks