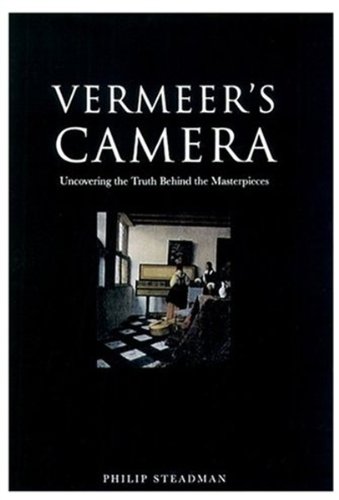 Vermeer's Camera: Uncovering the Truth Behind the Masterpieces
by Philip Steadman
Publisher's Description
An intriguing piece of detective work by professor Steadman argues for the use of the Camera Obscura by the celebrated painter, Vermeer. Carefully researched and written, Steadman weighs the arguments for and against Vermeer's use of the Camera Obscura, and then turns to the paintings themselves, where he finds the evidence he needs. A must for those interested in the deep historical roots of photography.
Amazon.com Review
Philip Steadman's remarkable book Vermeer's Camera cracks an artistic enigma that has haunted art history for centuries. Over the years, artists and art historians have marveled at the extraordinary visual realism of the paintings of the 17th-century Dutch painter Jan Vermeer. The painter's spectacular View of Delft, painted around 1661, and the beautiful domestic interior The Music Lesson seem almost photographic in their incredible detail and precise perspective. Since the 19th century, experts have speculated that Vermeer used a camera obscura, an early precursor of the modern camera. However, conclusive proof was never discovered, until now. In Vermeer's Camera, Steadman proves that Vermeer did indeed use a camera obscura to complete his greatest canvases. Part art-historical study, part scientific argument, but mainly a fascinating detective story, Vermeer's Camera argues:

Vermeer had a camera obscura with a lens at the painting's viewpoint. He used this arrangement to project the scene onto the back wall of the room, which thus served as the camera's screen. He put paper on the wall and traced, perhaps even painted from the projected image. It is because Vermeer traced these images that they are the same size as the paintings themselves.

Steadman painstakingly develops his argument through careful study of the history of the camera obscura, an exploration of 17th-century optics, and a detailed study of the light, optics, perspective, and measurement of a series of Vermeer's paintings. He goes to remarkable lengths to reconstruct Vermeer's studio and its furnishings, down to the angle of the light from its windows. The science is complex, but always clearly explained. This is not an attempt to reveal Vermeer as an artistic "cheat." Steadman convincingly argues that "Vermeer's obsessions with light, tonal values, shadow, and colour, for the treatment of which his work is so admired, are very closely bound up with his study of the special qualities of optical images." Vermeer's Camera is a wonderful book that shows the ways in which, during the 17th century, art and science went hand in hand. It offers an enlarged, rather than reduced, perspective on Vermeer. --Jerry Brotton. Amazon.co.uk
ISBN: 0192159674
Publisher: Oxford University Press, USA
Hardcover : 232 pages
Language: English