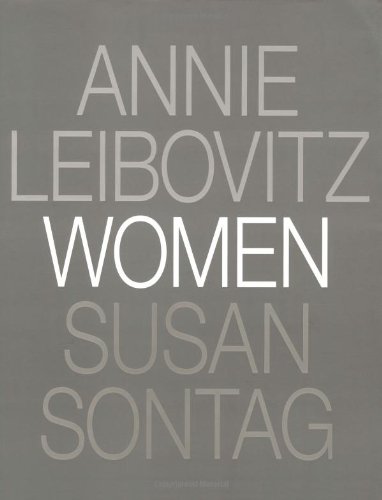 Women
by Annie Leibovitz
Publisher's Description
Moving well beyond her initial fame as a rock & roll correspondent and celebrity caricaturist for Rolling Stone, Women celebrates the evolution of Annie Leibovitz into one of the most formidable portraitists since Richard Avedon. Her portraits of women--from Hillary Clinton in the White House to Tammie Winfield, a victim of domestic violence--are deeply felt, often incorporating their subject's environments in revealing ways. Susan Sontag, in a fully collaborative role as editor and writer, offers her observations on the essential qualities of women in photography.
Amazon.com Review
Each of the extraordinary portraits made by photographer Annie Leibovitz for her book Women stands on its own. Looked at together, these "photographs of people with nothing more in common than that they are women (and living in America at the end of the twentieth century), all--well almost all--fully clothed," writes Susan Sontag in the book's preface, form "an anthology of destinies and disabilities and new possibilities." Leibovitz, who in her years working for Rolling Stone, Vogue, and Vanity Fair magazines has photographed hundreds of celebrities, turns her lens on a wide range of ordinary and extraordinary female subjects: coal miners, socialites, first ladies, artists, domestic-violence victims, an astronaut, a surgeon, a maid. What she creates is a reflection of contemporary American womanhood that mirrors both women's accomplishments and the challenges they still face individually and as a group.

Leibovitz demonstrates her own range as a photographer in this body of work, shooting in the studio and natural settings and working in both black-and-white and color film. She depicts model Jerry Hall wearing a little black dress, a fur coat, and high heels, staring frankly at the viewer from a velvet chair in a plush red parlor while her naked infant son nurses from her exposed right breast. Schoolteacher Lamis Srour's eyes--the only part of her face visible behind her heavy black veil--illuminate a dark black-and-white portrait. Leibovitz frames actress Elizabeth Taylor and her dog Sugar by their shocks of snow-white hair. She captures four Kilgore College Rangerettes, a drill team, at the apex of their kicks--white-booted legs pointing up, obscuring their faces and revealing the red underpants beneath their blue miniskirts. There are many more wonderful and unexpected images here, over 200 in all. The delight in discovering them awaits readers. --Jordana Moskowitz