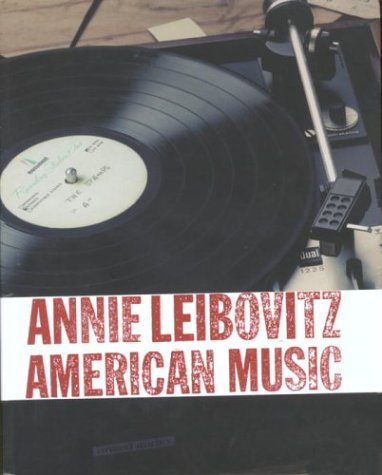 Annie Leibovitz: American Music
by Annie Leibovitz
Publisher's Description
Amazon.com Review
It looks like a gorgeous nostalgia trip to judge by the cover image alone. The photo is of an old school record player that lies unplugged, a white label test-pressing waiting on the turntable, while a band of paper wrapped around the cover announces the title in ye olde woodblock-looking type, American Music. A reading of the small type on the back cover reveals the image to be the very record and turntable left in Elvis Presley’s bedroom the day he died, and the mind reels, thinking about whether the King listened to this record on that day or not, and who are the Stamps, anyway? An excellent selection of musician portraits interspersed with crumbly wooden jook joints and wide open fields in the South, American Music covers a wide gamut of jazz, blues, punk, country, hip-hop, rock and roll, folk and gospel musicians. And while most of the pictures were shot between 1999 and 2002, some go back to the early 1970s, when Leibovitz first became Rolling Stone magazine's chief photographer. Some of the artists are very well-known (Michael Stipe, Dolly Parton, Bob Dylan) and some of them are not (Jessie Mae Hemphill, Other Turner, Carlos Coy). Leibovitz really has a way of relaxing her performers, and this is a great part of her gift. Even when the pictures are so posed as to be ridiculous (like, what's Michael Stipe doing on that bedbug-ridden mattress—-the guy's a billionaire?), she catches her subjects at their most "real." They are lost in their music, or just doing some "real person" thing (look, there is Beck in his car—does Beck really drive his own car?). The presentation may be a little hokey, but this book is sure to please most any music fan. --Mike McGonigal
ISBN: 0375505075
Publisher: Random House
Hardcover : 264 pages
Language: English
Dimensions: 9.8 x 12.2 x 1.3 inches