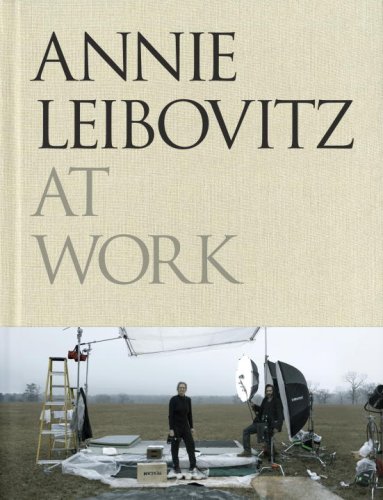 Annie Leibovitz at Work
by Annie Leibovitz
Publisher's Description
Annie Leibovitz describes how her pictures were made, starting with Richard Nixon's resignation, a story she covered with Hunter S. Thompson, and ending with Barack Obama's campaign. In between are a Rolling Stones Tour, John Lennon and Yoko Ono, Demi Moore, Whoopi Goldberg, The Blues Brothers, Arnold Schwarzenegger, Keith Haring, Mikhail Baryshnikov, Patti Smith, George W. Bush, William S. Burroughs, Kate Moss and Queen Elizabeth. The most celebrated photographer of our time discusses portraiture, reportage, fashion photography, lighting, and digital cameras.
Amazon.com Review
Book Description
“The first thing I did with my very first camera was climb Mt. Fuji. Climbing Mt. Fuji is a lesson in determination and moderation. It would be fair to ask if I took the moderation part to heart. But it certainly was a lesson in respecting your camera. If I was going to live with this thing, I was going to have to think about what that meant. There were not going to be any pictures without it."
—Annie Leibovitz 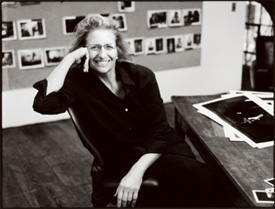 In 1977, when Jann Wenner, the editor of Rolling Stone, asked me to prepare a fifty-page portfolio of my pictures for the tenth anniversary issue of the magazine, I decided not to simply make a selection of photographs that had been published. I looked at everything I had done since I started working. It was a revelation. For one thing, I had no idea that I had accumulated so many photographs. You lose track of them when you’re working every day. And you see the work in a different way when you look at it from the distance of time. You get a sense of where you are going. You start to see a life.

I had the opportunity to edit my work most thoroughly when I prepared two retrospective books, Annie Leibovitz: 1970–1990 and A Photographer’s Life: 1990–2005. It was thrilling to see that first book laid out chronologically. To see the pictures historically. The second book, A Photographer’s Life, was assembled immediately after the death of Susan Sontag and my father. Editing the book took me through the grieving process.

The books are pure. They are mine. The magazines I work for don’t belong to me. It’s the editor’s magazine, and the editor has every right to use the material the way he or she wants to. It isn’t just that art directors and editors at magazines make selections that I wouldn’t necessarily make. Which they sometimes do. Or that they run pictures too small. Or that they put so much type on the pictures that you can’t see them anymore. Magazines have quite specific needs. It’s a collaboration only so far, which is true of almost all assignment work.

When I began working on my new book, I thought it would be a pamphlet of maybe forty pages or so. I intended to take ten of my photographs and dissect them. They didn’t have to be my most famous pictures, just pictures that I cared about. But as I began going through the material I realized that I might as well be more ambitious. I started to think that I would try to answer every single question anyone has ever asked about how my work is done. To defuse the mystery, and the misconceptions. To explain that it’s nothing more than work. And learning how to see.

So my forty-page pamphlet became a 240-page book with over a hundred photographs in it. It is written for someone like the person I was at the beginning of my career, when I was in art school. A young me. I didn’t know which road I would take. Whether it would be a commercial road, a magazine road, an artistic road, a journalistic road. It’s written for that person. Someone who is interested in photography but isn’t sure how they want to use it.

The book is more emotional than I had imagined it would be. But, most importantly, it is my edit. No one is going to care about, or understand, your work the way you do, and if you are going to explain it you have to be able to present it the way you want to. That’s what a book can do better than any other medium.