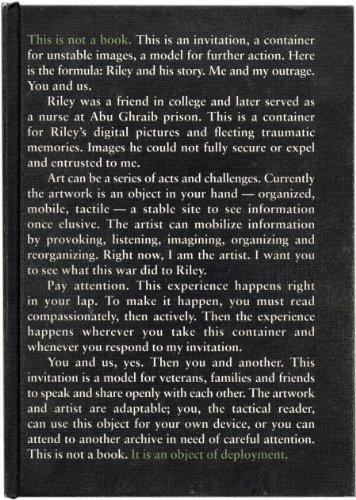 Monica Haller: Riley and His Story: Me and My Outrage, You and Us
by Riley Sharbonno
Publisher's Description
Now in paperback, Monica Haller's acclaimed Riley and His Story presents the daily life of the Iraq war, as lived and photographed by Riley Sharbonno. Haller and Sharbonno met in college before the latter was deployed, serving as an army nurse at Abu Ghraib prison from 2004 to 2005. Sharbonno used his camera as an almost prosthetic device to record the events his memory suppressed; on other occasions he used the camera to “store” overwhelming experiences with the aim of processing them later. Many of these images are indeed overwhelming: “These aren't the photos we're likely to find in grandma's photo album 50 years from now,” he rightly observes. The photo pages in this book are variously sized, intersecting and overlapping to mimic the unstable nature of such memories, conveying the blurry jumble of amnesia and trauma. It is an invitation to all-veterans, family and friends-to face the realities of war.
ISBN: 2915359423
Publisher: Onestar Press/Fälth & Hässler
Paperback : 480 pages
Language: English
Dimensions: 6.4 x 8.9 x 0 inches