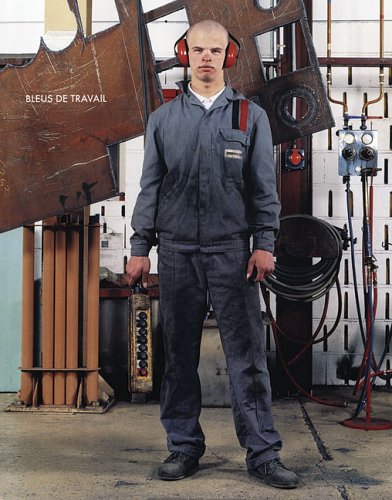 Born in 1975, Charles Fréger graduated from the Rouen School of Fine Art in 2000, and has been working ever since on photographic portraits in series, focusing on everything that conveys the notion of belonging to a group—particularly a group of young people both rebelling against and embracing their shared identity, a social “skin” by which they refer to and recognize themselves. The young working-class men and women photographed in their work uniforms in Bleus de Travail are marked as prisoners or nuns by their coveralls, but what Fréger sees, as this book’s introduction puts it, is “the way in which the individual ‘lives and works’ the uniform,‘their’ uniform: new, ironed or used, torn, stained, closed, opened or rolled up, covered up or uncovered, tight or loose, too short or too long: this manner by which they differentiate or distinguish themselves from it.”
ISBN: 2915409005
Publisher: Distributed Art Publishers (DAP)
Paperback : 112 pages
Language: English