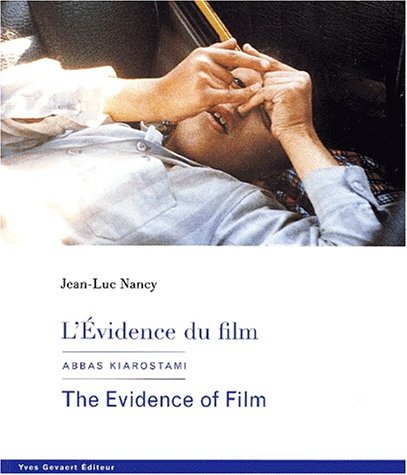 Kiarostami Abbas: The Evidence of Film (French Edition)
by Jean-Luc Nancy
Publisher's Description
'Before it is opened, L'Évidence du film looks like another art book gathering the thoughts of the French philosopher on the Iranian director Abbas Kiarostami's most known movies in the West (from Where's My Friend's House to The Wind Will Carry Us). The book is composed of three texts, each presented in French, English, and Persian: a main essay on Kiarostami's recent movies; an older commentary on one of the director's movies (Life And Nothing Else); and a conversation between Nancy and Kiarostami. But Nancy's underlying ambition for film theory appears rapidly. In Life and Nothing Else Nancy finds a perfect reflection of his own philosophy; and, as early as the Introduction, the philosopher positions this movie centrally in Kiarostami's work, with Kiarostami as a 'privileged witness' of the emergence of a new form of cinema. This positioning of Kiarostami - and one of his movies in particular - at a cornerstone of the history and aesthetics of film is the starting point of Nancy's argument. But it is also a giant step as it conditions the interest of the book to the reader's willingness to accept that Nancy's comments on just seven movies can be extrapolated to cover film and visual arts in general. This demanding effort will constitute the main limit of this book. Nevertheless the correspondence between Nancy's thinking and Kiarostami's filming proves to be a perfect match between film and philosophy and seems to carry enough convincing power to make reading L'Évidence du film an invigorating experience.'