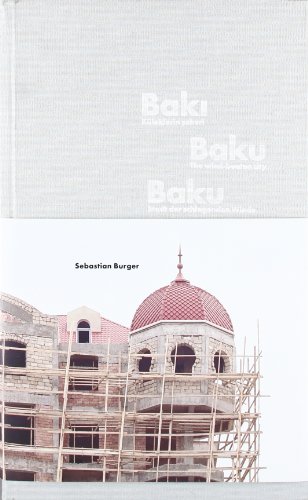 Baku - Stadt der schlagenden Winde: Baku, the wind-beaten city / Baki - Kuleklerin seheri
by Oriana Kraemer
Publisher's Description
Azerbaijan's economy is rapidly growing. The country undergoes its second oil boom. The Persian name of the Caspian metropolis isn't only referring to its strong winds but could also allude to its turbulent architectonical history. Baku's changes in the current century, however, are especially grave: land prices rocket high, and alone between the years 2000 an 2008 about 800 new high-rise buildings have been built. However Azerbaijan is rich in architectural heritage: Wilhelminian styled buildings, boulevards and great promenades form the cityscape award Baku a European flair even though its core is oriental. The new apartments are often vacant and often bought for investment purposes only. In the course of this rapid change a lot of Azerbaijani cultural heritage from the turn of the last century is about to be replaced.

This book focuses on Azerbaijan's architectural heritage as a representative for the globalized development of many former Eastern Bloc states. The book aims to sensitize an audience for the responsibility in this development and to increase more awareness in global interdepencies, not only in the western world but in Baku, too.

The photographer Sebastian Burger visited Baku within his diploma project. His photographs document the impact of the socioeconomic changes in Baku.

He points out the existing, the changing, the new, the old and how people find their way within it. The photographs are complemented by an article of the architect Oriana Kraemer.

Book and Print (OIL BOOM EDITION I): 600 / The book comes along with a signed and numbered photography (12 x 18 inch) of Sebastian Burger / 4 versions with 1 of 4 prints, each in an edition of 10 copies in a handmade clamshell Box (the book has a tiny binding defect).
ISBN: 3000327673
Publisher: Burger, Bremen
Hardcover Language: English