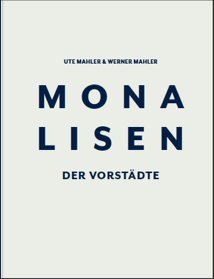 Monalisen der Vorstadte
by Ute Mahler and Werner Mahler
Publisher's Description
For their project 'Mona Lisas of the suburbs' Ute and Werner Mahler photographed young women in transition, who are living between city and countryside, between being a child and being a woman. Thirty of these portraits have been selected for a book that is now being published by Meier and Mueller.

Ute and Werner Mahler were awarded this year's 'Kunstpreis Fotografie' by Lotto Brandenburg for 'Mona Lisas'. The award ceremony will be held on 15 September 2011 at Haus der Brandenburgisch-Preußischen Geschichte in Potsdam. Starting on 16 September, the work will be shown at Potsdam's Kunsthaus sans titre.

To produce the body of work, the Mahlers spent three years traveling across Europe, meeting their 'Mona Lisas' in Liverpool, Minsk, Florence, Reykjavik and Berlin. Going to the suburbs, they waited for girls that had something mysterious and timeless in their faces. They portrayed them in their own surroundings, between buildings and meadows, with an equipment used mostly in old photo studios: a plate camera, a black cloth, a tripod and a stool with a head rest. The girls took a seat on this stool and hinted at a smile, just like the model in the famous Renaissance painting.

The first 'Mona Lisas of the suburbs' were shown as part of the OSTKREUZ exhibition 'The City. Becoming and Decaying'. The book published by Meier and Mueller contains a new and expanded selection of photographs and a text by architect and author Wolfgang Kil. Its print run is limited to 500 copies.
ISBN: 3000353712
Publisher: Meier und Mueller
Hardcover