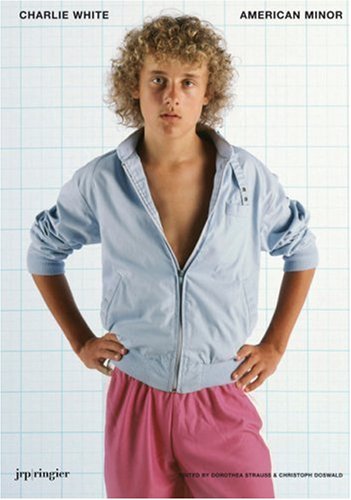 Charlie White: American Minor
by Christoph Doswald
Publisher's Description
Aiming for the jugular of the American unconscious, the photographs of Los Angeles-based artist Charlie White, born in 1972, inspect the culture's fictions not with the raw lens of a Larry Clark, but with the directorially staged artifice of, say, Jeff Wall or Gregory Crewdson. American Minor delves into an important and ongoing theme in White's work-the American teen, and all that goes into its manufacture. Having approached this theme with an earlier project whose protagonist was a hairy, fragile doll named Joshua, here White tackles the taboos of nascent sexuality in the American teen girl-both the vulnerability of that sexuality as a topic and the ruthlessness with which it is exploited when it goes unexamined. Cataloging studio archives, film stills, animation stills and scripts, and using images culled from White's two-year study of one teenager, archives of magazine covers featuring iconic blonde models, stills from his first 35mm film and his photographic comparative study of teens and transgendered people, American Minor presents White's ongoing and never-before-seen studies of the American teen subject as both image and idea. American Minor is a bold excavation of the sociosexual forces that surround us all.
ISBN: 3037640030
Publisher: JRP|Ringier
Hardcover : 144 pages
Language: English
Dimensions: 9.5 x 13.3 x 0.7 inches