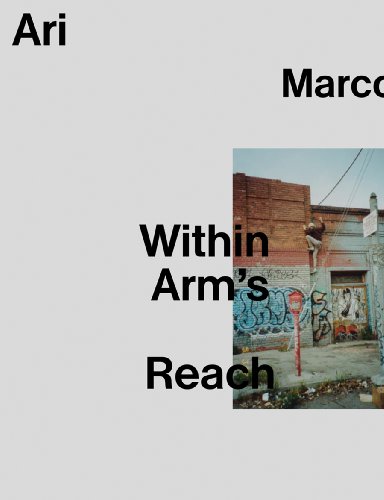 Ari Marcopoulos: Within Arm's Reach
by Stephanie Cannizzo
Publisher's Description
Born in Amsterdamin 1957, AriMarcopoulos came to NewYork in 1979 and quickly became part of a downtown art scene that included Jean-Michel Basquiat, Keith Haring and RobertMapplethorpe. Since then,Marcopoulos has become recognized as a leading documentarian of contemporary culture, having chronicled the emerging hip hop scene, shot snowboarders in action and revealed the vicissitudes of his family life.Marcopoulos always appears to have forged a strong connection with the people he photographs,whether celebrated figures—fromAndyWarhol to Kiki Smith, John Cage to LL Cool J—ormore obscure personalities, so that he captures,without sentimentality or voyeurism, the intimate sensation of their daily lives.His images are particular to a time and place, but reach out to us via familiar themes such as family and the longing for adventure.The first retrospective onMarcopoulos,Within Arm’s Reach collects work fromthree decades, and is supplemented with an essay by Stephanie Cannizzo.
ISBN: 303764074X
Publisher: JRP|Ringier
Paperback : 136 pages
Language: English
Dimensions: 8.4 x 10.9 x 0.3 inches