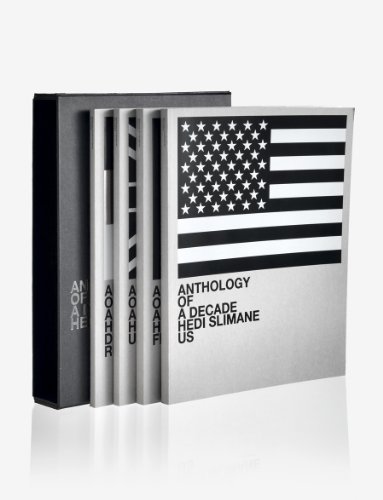 Hedi Slimane: Anthology of a Decade 2000-2010
by Hedi Slimane
Publisher's Description
In a 2003 conversation with then-Interview magazine editor Ingrid Sischy, French designer Hedi Slimane (born 1968) described his beginnings as a photographer: 'I started taking pictures before I even began in fashion. I didn't start with clothes until I was 16, but I had my first camera when I was 11. I've always taken pictures, almost like some people take notes or write down their thoughts.' As Hedi Slimane: Anthology of a Decade reveals, Slimane's photographs, which traverse the music scene, the New York art scene, street fashion and haute couture, are as fresh as his groundbreaking work in fashion. Drawing on photographs taken throughout the past decade, this volume records Slimane's early years in the fashion industry, before, during and after his tenures at Yves Saint Laurent and Christian Dior. It was during this decade that Slimane brought to men's fashion an androgynous, rock verve that influenced couture worldwide. This selection of 175 color photographs lays bare Slimane's inspirations for this look, evidencing his attention to both youth culture and more historical groundings in photography; in their composition, these pictures also affirm that the designer's major contribution to contemporary haute couture has been his continual refinement of line and silhouette. Anthology of a Decade is revelatory both as a hitherto little-known instance of Slimane's many talents, and as an elucidation of his work in fashion.
ISBN: 3037641150
Publisher: JRP|Ringier
Paperback : 724 pages
Language: English
Dimensions: 10.5 x 14.5 x 0 inches