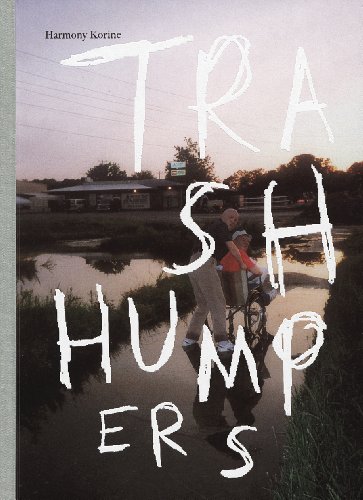 Harmony Korine: The Trash Humpers
by Harmony Korine
Publisher's Description
Harmony Korine shocked a nation with his first movie script, 1995's Kids, about drug-addled adolescents wallowing in ennui and sex. Arbiters of culture and morality wrung their hands, but two first-time actors in Kids-Chloë Sevigny and Rosario Dawson-found longtime fame in the ensuing years. Korine himself went on to direct several audaciously polarizing feature films. This book, The Trash Humpers, is based on the photographic research for Korine's latest directorial project of the same name. Released on lo-fi VHS and edited in part while blindfolded-or so Korine attests-the 78-minute movie follows a gang of miscreants who roam the streets of Nashville, molesting garbage bins and causing random mayhem. It's an 'ode to vandalism and the creativity of the destructive force,' Korine has said. 'Sometimes there's a real beauty to blowing things up, to smashing and burning. It could be almost as enlightening as the building of an object.'
ISBN: 3037641169
Publisher: JRP|Ringier
Paperback : 136 pages
Language: English
Dimensions: 8 x 11 x 0.4 inches