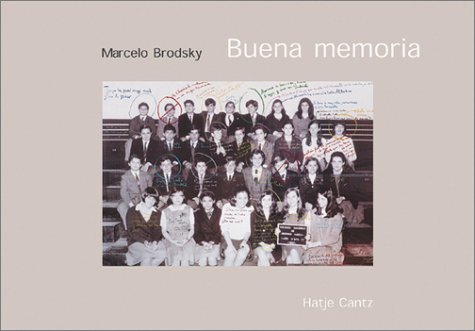 Buena Memoria / Good Memory (German and English Edition)
by Inka Schube
Publisher's Description
Marcelo Brodsky was 22 years old when a handful of officers led by general Vileda staged a coup that forced Argentina into a cruel military dictatorship that lasted until 1984. The resulting terrors led to the deaths of 2,300 opponents of the regime; at least 30,000 were declared missing. During this period, artist and human rights activist Marcelo Brodsky fled to Barcelona. After the regime ended and Brodsky returned from exile, he created Buena Memoria, a complex and deeply touching study about individual suffering which is featured in the book at hand and gives it its title. Taking as its starting point the graduation photograph of the class of 1967 at Colegio Nacional in Buenos Aires, the work is a multi-faceted biographical research project. In it, photographs from family albums, videos, personal and literary notes, and recent documents that attempt an analysis of the dictatorship are found side by side. The result is an impressive and touching memorial, a collaged reconstruction of Brodsky's friends' biographies and that of his brother Rubén, who is missing to this day.
ISBN: 3775713530
Publisher: Hatje Cantz Publishers
Hardcover : 95 pages
Language: English